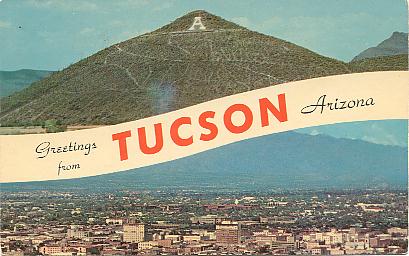 The subdivisions within the Palo Verde Park Neighborhood Association were constructed in the 1950s in east-central Tucson, about seven miles east from the heart of downtown and Tucson’s original town site.

The primary character-defining feature of the neighborhood are the low-profile, Modern Ranch house style of architecture that exemplified popular World War II planned communities in Tucson. The neighborhood also is characterized by traditional grid street patterns and the use of low water use plants and trees, including cacti, mesquite, Palo Verde and ornamental shrubs. Front yards typically follow traditional low-water use design and are covered in decorative gravel. The use of burnt adobe and red brick building materials provide a unifying sense of identity and cohesive architectural character, but avoids the duplication of design that is often reflective of newer neighborhoods. Single story construction similarly helped protect mountain views, which were a key feature in marketing materials of the time.

As described in “Tucson Post-World War II Residential Subdivision Development 1945-1973,” (https://www.tucsonaz.gov/files/preservatio/Text_-_Tucson_Post_WWII_Residential_Subdivision_Development.pdf) –used as a reference throughout much of this text – there was a pronounced housing boom as Tucson experienced post-war housing growth. At the beginning of World War II, Tucson had approximately 40,000 people. The population surged to nearly 123,000 by 1950. Hughes Aircraft would open the following year, employing more than 5,000 workers and becoming the largest technology employer in the state.

Community boosters at the time focused on attracting new industry and new residents, which resulted in a tripling of the production rate of homes between 1951 and 1956 – an average construction rate of about 1,600 new single family homes each year.

This period also saw the emergence of a stronger role for corporate subdividers and professional development companies, as opposed to small-scale builders who might build only a few houses a year, either on spec or for a friend or family member. From 1957 to 1966, the average number of single family homes kept up a similar pace, but developments continued to move farther out from the city center.

To stay competitive, home builders stressed amenities that went beyond mere basic needs.  They also began branding subdivisions with Spanish names after World War II, conveying a sense of place. Consider this piece from the Arizona Daily Star in May 1955, extolling the virtues of the new Mañana Vista estates, then under construction:

Come out now to see these exciting homes while they are actually in the building stage….see them while you can still judge for yourself the fine quality of the materials, the painstaking care, the pride of workmanship that goes into the making of every single home. Inspect the three models to fit every taste, need and budget. No down payments to vets.

The houses in this neighborhood were influenced in part by the fact that lumber was expensive and difficult to obtain in the early postwar years. Brick, concrete, burnt adobe and slump block, on the other hand, were readily available and comparatively inexpensive. The more ornate residential styles of the early 20th century were not compatible with the scarcity of materials and more ornamental features. Simplified, ranch style designs marked much of the postwar growth period.

Adobe construction is one of the oldest construction techniques, used for centuries in the southwest and the primary construction material in Tucson prior to the arrival of the railroad in 1880. Made of straw and soil, just as traditional sun-dried adobe, burnt adobe in the early 1950s became one of the dominant construction materials, marked by a red and rust hue. Larger than bricks, adobe not only required less material and labor to build a home, but had a cost advantage because it was produced in Mexico and because it provided resistance to the desert heat. While brick also would remain one of the most common building materials, slump block in the 1960s became a popular choice as developers continued to look for increased structural stability.

This website uses cookies to improve your experience while you navigate through the website. Out of these cookies, the cookies that are categorized as necessary are stored on your browser as they are essential for the working of basic functionalities of the website. We also use third-party cookies that help us analyze and understand how you use this website. These cookies will be stored in your browser only with your consent. You also have the option to opt-out of these cookies. But opting out of some of these cookies may have an effect on your browsing experience.
Necessary Always Enabled
Necessary cookies are absolutely essential for the website to function properly. This category only includes cookies that ensures basic functionalities and security features of the website. These cookies do not store any personal information.
Non-necessary
Any cookies that may not be particularly necessary for the website to function and is used specifically to collect user personal data via analytics, ads, other embedded contents are termed as non-necessary cookies. It is mandatory to procure user consent prior to running these cookies on your website.
SAVE & ACCEPT